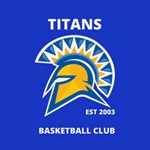 The name Titans was chosen by a competition won by Karen (Fleming) Crocker.

Titan’s women have always been a strong force in the WBA but the merger meant that they had so many players they had to field 2 x A grade women’s teams initially diluting their strength.

Surprisingly Titans didn’t win their first WA Premiership until 2006 defeating Demons with Ebony (Curwood) Dare taking out one of her many MVP awards.  Titans have since gone on to be the most successful WA club in WBA history.

Fraser Marshall is the only Multiple MA MVP for Titans; he helped them to their first and only MA title in 2005.